Baumann has been awarded the 2016 FLTA Award for Innovation, for it’s patented Archimedes outreach system, the most important innovation in sideloader design in 40 years!

A delighted UK MD, Jason Reynolds, stepped up on stage with the Baumann team to receive the award, appropriately in the shape of Archimedes, from presenter Gyles Brandreth and FLTA Chairman, Andrew Woodward. 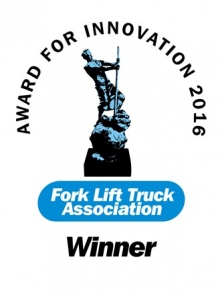 Now in its 22nd anniversary year, the FLTA Awards is the biggest and most prestigious annual event in the materials handling industry calendar.

Launched to encourage and reward examples of excellence throughout the fork lift truck industry and beyond, the Awards has a truly international appeal with sponsors and winners flying in from Europe and the Far East for the Oscars-style ceremony.

Perhaps the most hotly anticipated of the night’s Awards are those given to the overall champions in the four main product categories: Environment, Ergonomics, Safety and the big one, Innovation.

MD Klaus Pirpamer flew in from the factory to witness the win and called to congratulate Mr Wolfgang Baumann who sent his best wishes to the happy team.

A big thank you to all those that took the time to vote for us!